Menu
Join Us
Give

For over 170 years, First Presbyterian Church has been a telling presence in the Tri-Cities and beyond. AHistory of the First Presbyterian Church of Grand Haven 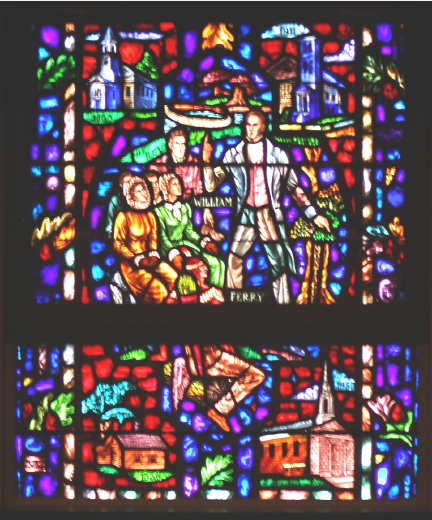 For over 170 years, First Presbyterian Church has been a telling presence in the Tri-Cities and beyond. The church was founded by the Rev. William Ferry in 1836, who settled here after floating down the Grand River on a canoe trip. Inspired by the natural beauty of the area and by the local need for spiritual leadership, he conducted the first worship service on November 2, 1834 in a local trading post. As interest grew, Grand Haven’s first church was formally established eighteen months later. William Ferry was also Grand Haven’s first mayor and post-master. Ferry Street in Grand Haven and the city of Ferrysburg are named for the Ferry family.

A window in our current sanctuary depicts the four buildings which have been home to our growing congregation. The window pictures the trading post in which the first worship service was held, the first building that was built on our current site in 1885, the “church house” that was built in 1911, and our current sanctuary which was built in 1955. Just as the Rev. Ferry’s first sermon was based on the text, “Do not despise small beginnings” (Zechariah 4:10), so the window pictures an acorn and an oak leaf. Great things can come from small beginnings. A church is, of course, not a building, but the very Body of Christ. We are Christ’s mouth, hands, and feet called to be lights of the world. Jesus tells us, “In the same way, let your light shine before men and women, that they may see your good deeds, and give praise to your Father in heaven.” William Ferry offered some very specific challenges to his flock as he began his ministry:

Throughout the years we have sought to live up to that high spiritual calling, and to translate that spiritual depth into practical ministry and mission both locally and abroad.

1834 — Sunday worship was held in Rix Robinson’s log home and trading post during the first winter. Services were conducted by Rev. William Ferry.

1835 — On March 11, 1835, Rev. William Ferry and his family conducted worship services in their partially completed log dwelling located on lot 23, on the southeast corner of Washington Street and Harbor Avenue (currently the location of Kirby Grill). Amanda White Ferry’s sister, Mary A. White, arrived in Grand Haven in June 1835. She started Sunday school using the attic space of the Ferry cabin, known as the Asher classroom. 1836 — Rix Robinson purchased several lots for community purposes: education, worship and public use, at a cost of $650.00. Rev. William Ferry purchased lot 186 and the first frame building was constructed, which served as a school, church, Sunday school, general meeting hall and county courthouse.

For the first 13 years, the place of worship was known as The Church of Christ. But when the children assembled for Bible study, the class was referred to as the Presbyterian Sunday School. On May 10, 1849, the church incorporated as The Presbyterian Church.

1856 — The Presbyterian Church adopted the Articles of Religious Association on March 15, 1856 and elected Rev. William Ferry as the church’s first president.

Until 1857, Rev. Ferry, with no remuneration, had been the church’s only minister. Rev. David M. Cooper was called to lead the church, and served for the next 5 years. 1881 — The church showed a deficit as well as a mortgage of
$5,000, held by Mr. F.D. Gray of Chicago. In 1885 fiscal matters
reached a critical state. Gray offered 2 propositions, either pay up the mortgage and interest, and he would contribute $1,000, or move the church from the Washington Street site and deed the lot to Gray, and he would donate $500 to the church. The congregation accepted the second proposition. The church, without porch and vestibule, was moved to the southeast corner of Fifth and Franklin Streets in the fall of 1885. It was completely remodeled in 1911. In 1927 a center for social activities known as “church house” was added. 1954 — On July 4, 1954 during the tenure of Rev. Wallace “Wally” Robertson, ground was broken on the present church sanctuary to accommodate a congregation that had grown to 1,208 members. It was dedicated December 18, 1955. In 1956 the original church was razed to make room for a chapel. Only the stained glass windows were saved. The large “Rock of Ages” stained glass window was donated to the Robinson Grace church in 1967, where it can be seen today. It is one of the area’s oldest stained glass windows.

From 1834-1850 the Presbyterian church was the only church in Grand Haven. The city’s second house of worship was to be the First Reformed Church, built in 1851.

Taken from In the Path of Destiny, by David H. Seibold, D.D.S. Stay up to date with First Presbyterian Church

Join us for our next event